10 SIGNS HE IS AN EVOLVED MAN 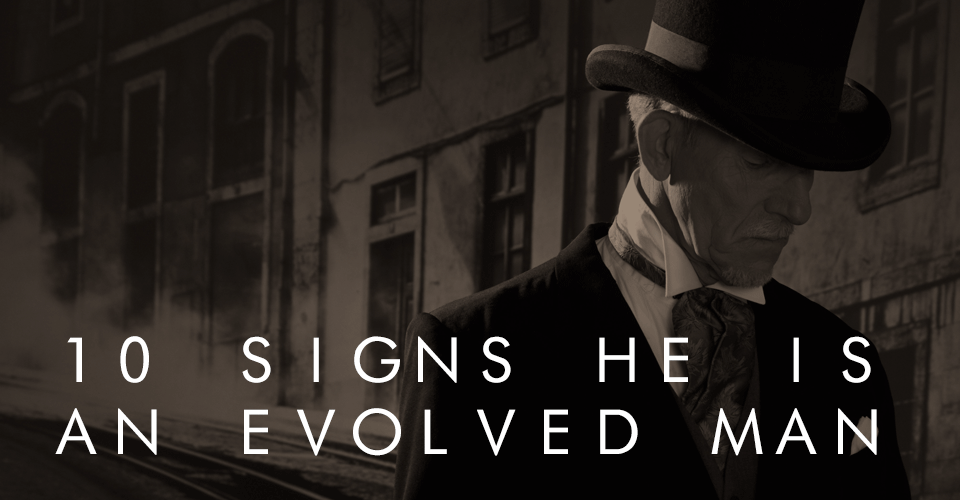 Honesty, honor, gratitude, compassion, loyalty, trust… he embodies them all.

2. HE PURSUES AND FULFILLS HIS DREAMS

You’ll know that he does, because he will tell you what he wants from his experience on this planet and what he wishes for others. He’s the one who engages people he’s just met and asks them with inquisitive interest what they are doing in their lives, and then dives into the conversation without one-upping them with something he’s doing.

3. HE LOVES HIS LIFE

He’s the guy who is trying new things, watching others try new things and enjoys both. If you stop to talk to him, he will tell you about a new book he’s read, a new place he has visited or a new class he’s taking. He has a lust for life and for living. He recognizes that he has limited time and wants to make the most of it.

4. HE WORKS ON IMPROVING HIMSELF

He’s a man who spends his time on improving himself emotionally as well as physically. He has an unquenchable thirst for living and for life. He’s a man who has a list of things he wants to learn… about himself, about the world around him, about others, and about countless subjects.

He’s not advocating his view… he’s sharing his thoughts. He’s listening to your opinions, internalizing them, and not judging them. He recognizes that his ego and masculinity are not hinged to being *right*.

6. HE HANDLES MISTAKES AND DISAPPOINTMENT

He knows that people aren’t perfect because he isn’t. He acknowledges his faults, so he won’t hold yours against you. If you fail him, he may be disappointed, but all will be well. He knows that through failure comes experience and learning, and that you can always try again.

Through it all, he knows how to walk a virtual mile in someone else’s shoes without wasting time judging their actions.

8. HE HAS PASSION FOR LIFE AND HIS WOMAN

His desire is boundless, and when he gets home he can’t decide if he wants to share his day or rip your clothes off. He will be involved in multiple things, on a constant quest to learn and grow. He might disappear into his passion for a short time, but he will always come back, because he actually never left. He will want to share what he’s doing—with you—and will also want to hear about everything you’re doing.

9. HE BACKS UP WORDS WITH ACTIONS

Whether it’s taking out the trash or showing love, he doesn’t just talk the talk… he walks the walk. A true man of example and action.

**10. HE CHOOSES A PARTNER IN LINE WITH HIS PURPOSE

He completes his work before setting out to connect his life with a partner. He chooses a woman in line with his purpose so that everything about his life and his work creates a synergy with hers. Because he’s giving his best he’s not uncomfortable receiving the same in return and there is a constant built of connection and affection every day that keeps the passion for each other growing.

SOURCES:
1-9 written by Charles Orlando
(Read the original 10 at The Problem with Women… is Men)
**10 written by Graham R White What Evolved Women Want