SO WHO ARE YOU, NICO? 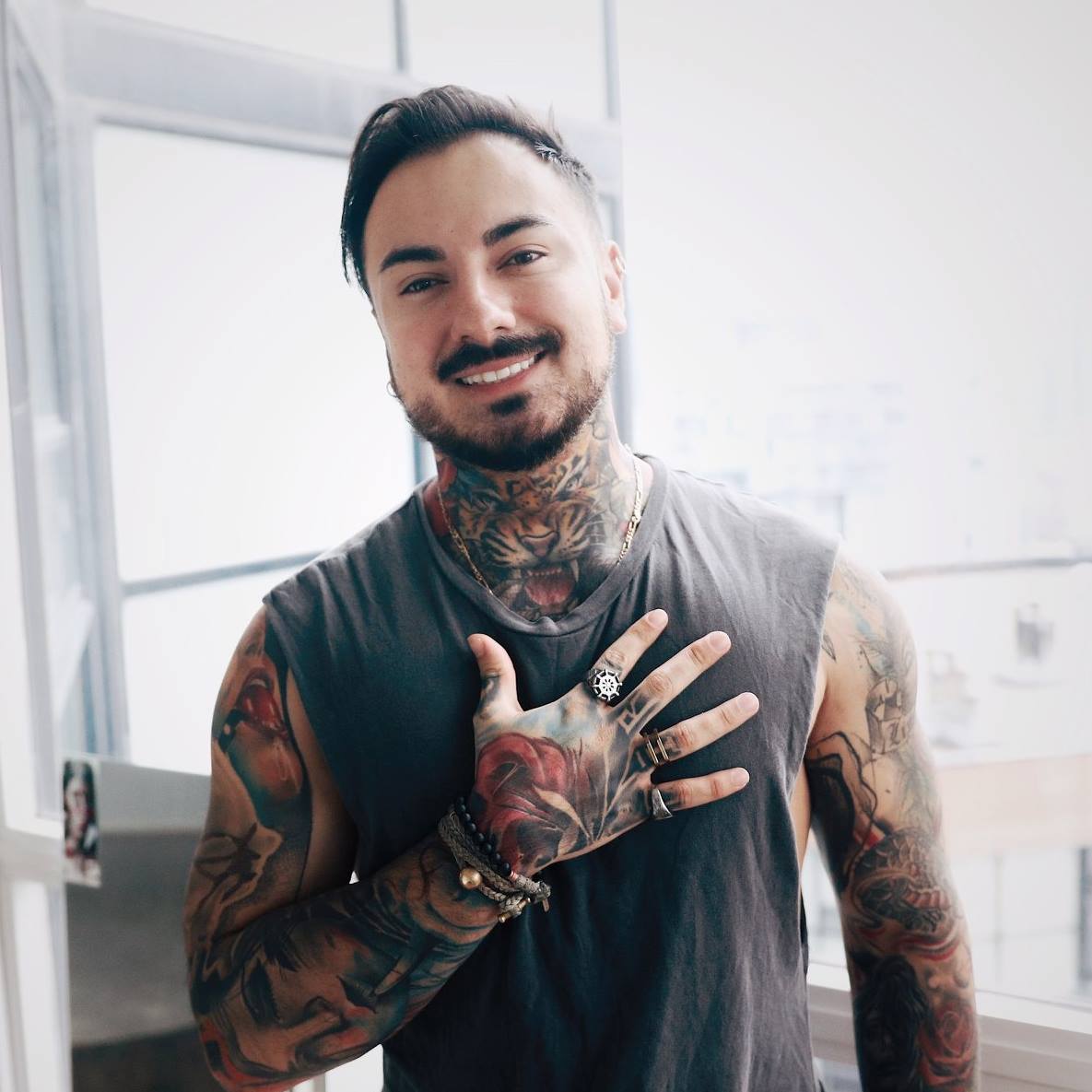 My name is Nicolas Canon and I was born in Bogota – Colombia.

Growing up I was extremely introverted. It was so bad that I would stutter and my body would shake if I had to talk with an adult or with a woman.

In fact – one day I watched a movie about kids with autism and was convinced that I was autistic and secretly hoped my parents would not find out.

Since socializing and playing with other kids was not my forte, I spent so much time in solitude reading and inquiring about life.

This curiosity kickstarted my spiritual journey at age 14.

I devoured mail-in courses on everything I could find related to yoga, spirituality, plant medicines, tantra, meditation and more.

While other kids were playing soccer I was going to nearby secluded mountains to meditate and recite mantras. While their attention was on the next party, I was reading and exploring about Ayahuasca and plant medicines.

That was until puberty hit me!

Suddenly solitude and “autism” were no longer my friends. I loved women and felt attracted to them yet limited in my ability to be at ease and fully self expressed. I was in fact voted “Least likely to have a girlfriend” during one of the years in high-school.

So I “deviated” from the spiritual path and became obsessed with the polarity of the masculine/feminine dance, with connection dynamics, with communication skills and so on.

Right after high-school I moved to Toronto – Canada, where I made it my primary focus to become confident, self-expressed and good with women.

I went from being the shyest and quietest boy in school to being the polar opposite: a cocky, loud, and obnoxious “frat guy”.

At this point I was thrilled with the newfound sense of power and attention I was receiving, but above all – with my own ability to create myself from scratch into the person I (thought) I wanted to be.

Over the next 8 years I ended up traveling and living in different cities around the world and becoming totally at ease with “starting from scratch” in places I did not know, dating all the women I wanted.

I felt I had mastered the social aspect of life and the inner dimension of being at peace in the face of uncertainty, fears and challenges.

(And of course, after a few heartbreaks my obnoxious and cockiness was alchemized into vulnerability and humility.) 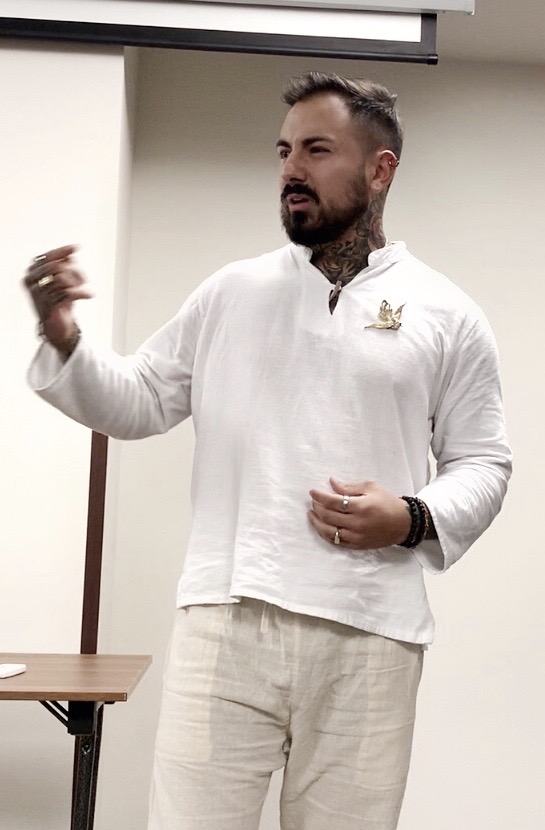 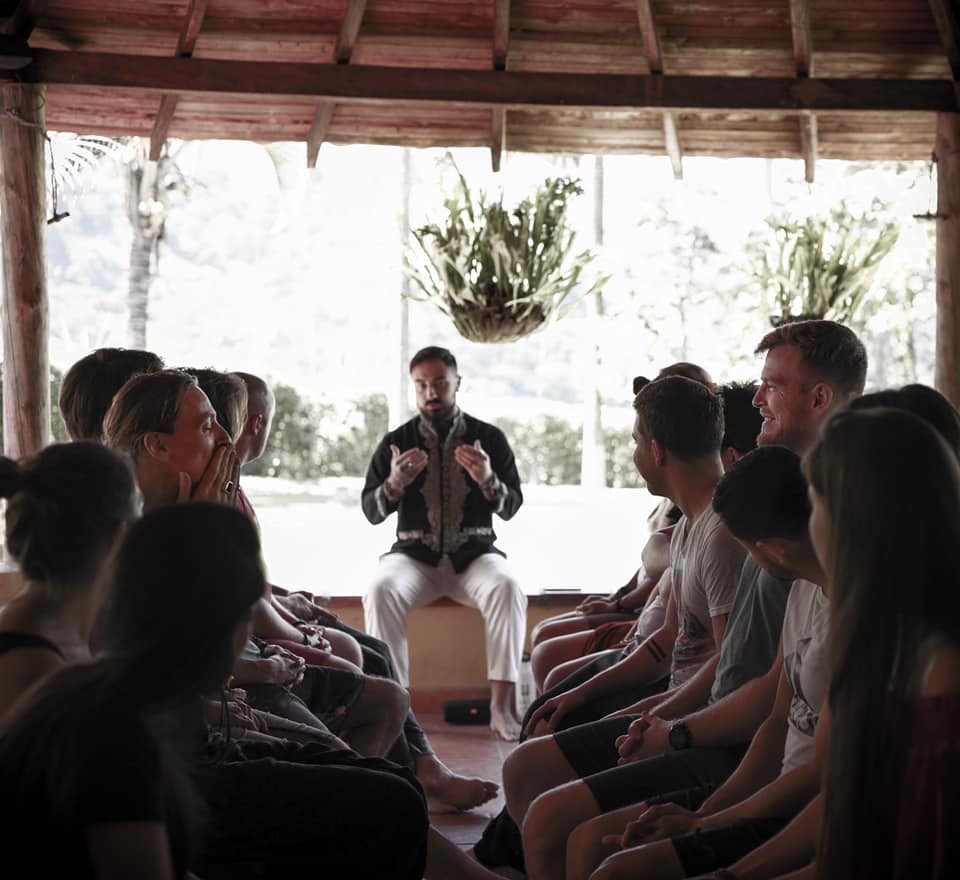 I ended up being invited to become part of the Ars Amorata coaching team. Ars Amorata is a movement/philosophy that celebrates the art of seduction, the rebirth of romance, and a lifelong quest for beauty and adventure.

During that time I was able to help hundreds of men across the globe to become a more self-actualized, vibrant and internally-defined version of themselves.

My focus over these years became conscious dating and relationships. I traveled the world teaching, coaching and learning from leading experts on these topics.

I explored and learned from a wide variety of movements and practices ranging from landmark, tantra, Tony Robbins, circling, authentic relating, somatic coaching, therapy-oriented coaching among others.

With these tools I was able to help men who were stuck in self-consciousness or a pattern of toxicity (as I had been) and guide them into becoming peaceful, powerful and a conscious MEN.

Around the same time, I launched my own tattooing business and in a matter of months it grew to generate up to mid five figures monthly.

I couldn’t help but notice how my early spiritual journey had provided me with a deep and practical understanding of how my mind, body and energies work – which made it fast and simple to re-design myself, transform and change every area of my life I focused on. (And able to teach this to others)

From the romantic and relational aspects, to peace of mind, self-love, financial abundance and freedom.

They say that the true spiritual path only starts once you’ve achieved “everything” you have dreamt of and realize that it is “not enough”. And I felt that way… so I went back to Colombia and picked up where I had left: The Spiritual Journey.

I dove deep and decided to learn and work with an Indigenous Amazonian Shaman and the sacred Ayahuasca traditions. Over this period (which is still going) I have been able to further understand and ground the realizations I had before – And learn to transmit them to others.

Living for months in the Ayahuasca Community, sitting in 100s of ceremonies, I purged what was left of my juvenile nonsense and stepped with FULL POWER into my manhood, learning to hold space for the deepest of processes and create impeccable containers for sacred transformations.

There I realized that the spirituality we have been sold is mostly bypassing. Mostly avoiding. Mostly disconnecting. 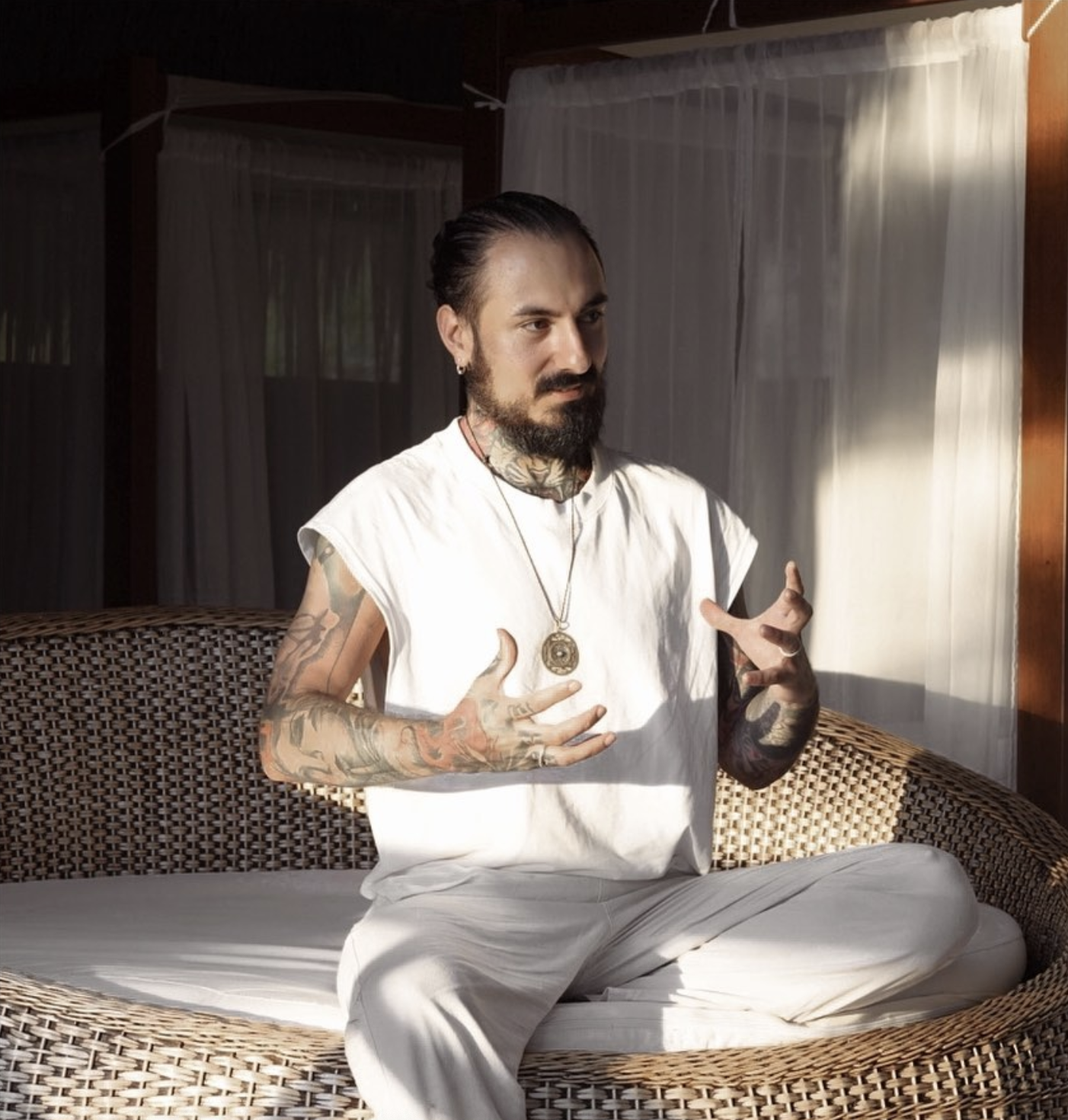 And this is why WE are here!
You and I.

My goal is to integrate the ancestral indigenous & shamanic wisdom together with all the years of coaching & leadership experience, in order to provide people with a practical way of living a better life.

Through my writing, programs and live events I aim to share the tools, perspectives and practices that have given me and my clients exponential financial, relational and spiritual growth.

For gifting me your attention and being part of this beautiful journey.

I got massive accountability and support to look at the shadow sides of my masculine and feminine and the opportunity to BE with all of myself in a way I have never before allowed.

Going deep requires deep support and this felt like a strong container to go somewhere foreign within myself.

Being able to allow the parts of me (that I thought made up my being) die was profound. The death of who I thought I was has made way for more of the truth and authenticity I was searching for within myself.

I have attended hundreds of workshops and events and the momentum usually fades after a week or so.

The lasting effects from this, the way I have already changed my life is profound. Because all the wisdom and understanding came from my own deep knowing and truth, not from being told what to do.

My soul got a chance to speak and I am still listening to all she has to say.

Nico is a profound, gentle yet firm leader… It has been life changing!

D. Mackenzie
The most valuable thing I got from working with Nico was that I started the journey back towards loving myself.
N. Carter

During this work I received very practical, wise tools on how to deal with literally anything that comes up within me in a healthy thriving manner and set and pursue my intention purposefully.

I had some deeply and valuable revelations.

Working through the pain I realised I had the answers and more, deep inside myself.

I received wisdom and support from Nico. When I asked he was right there to guide me through my thoughts and give me some clarity, that was truly invaluable.

I felt deep connection. I feel more connected to the universe and my spirit- it will guide me to where I want to go.

I understand that now. 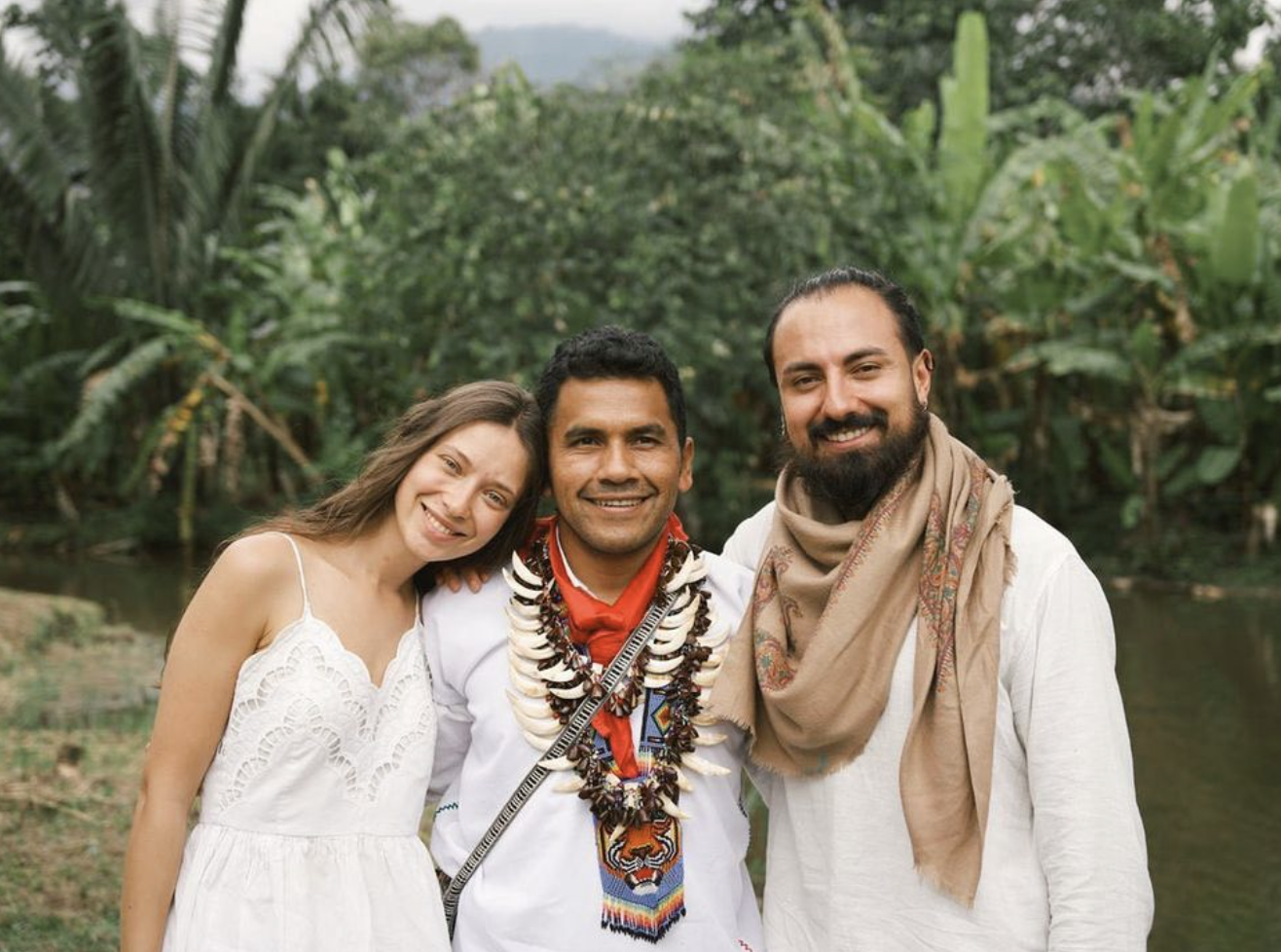